PLENARY: Honoring the Divine Mother: A Path to Peace 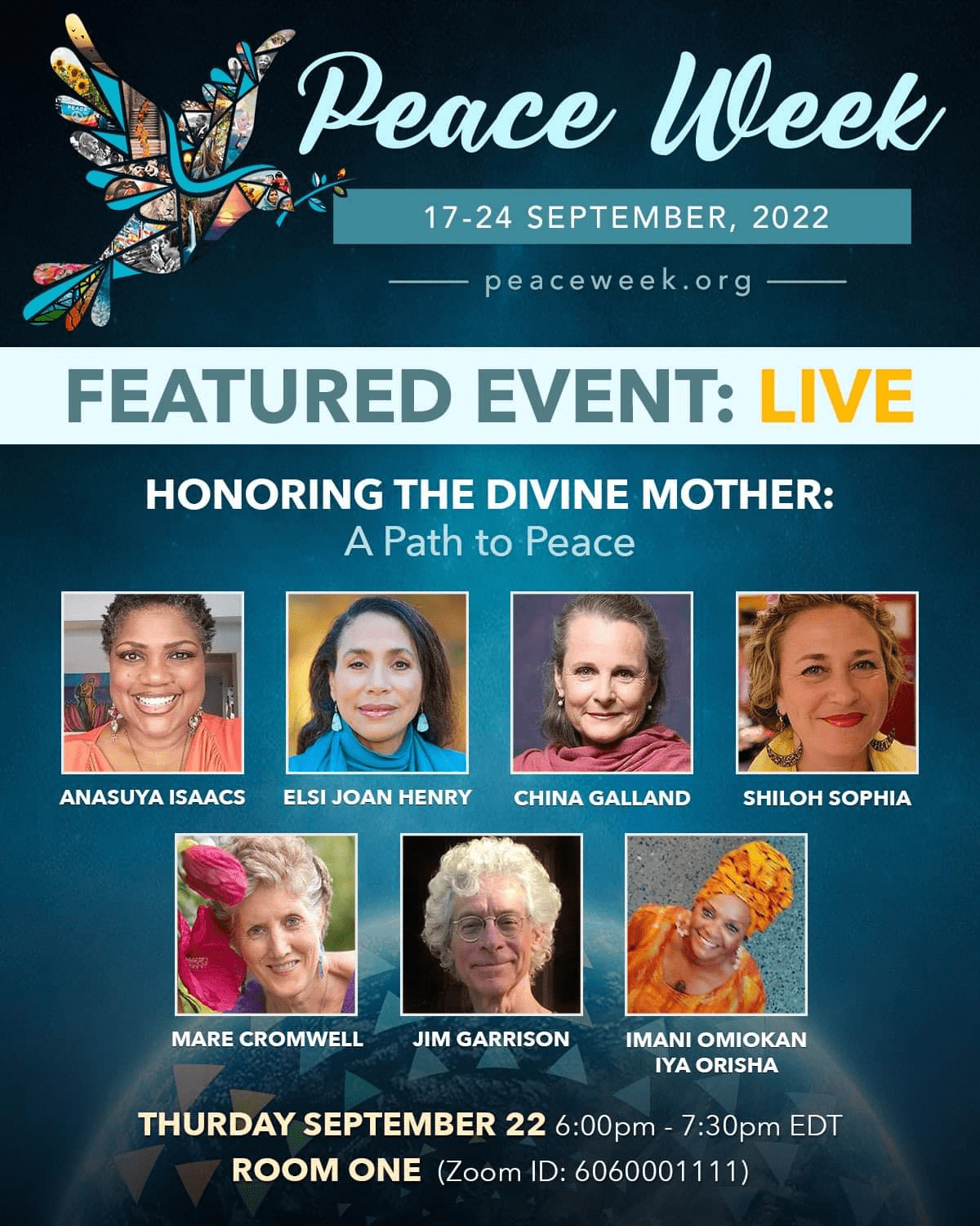 THE DIVINE MOTHER: A PATH TO PEACE

Pachamama, Tara, Shekinah, Atabey, Mami Wata, Gaia, Erzulie Danto, Kali, The Black Madonna, Crow Mother, Virgin of Guadalupe, Yemeya. Yingarna, the Creation Mother of the Aborigines, El Shaddai, Sophia: these are just a few of the many names of the Divine Mother as she is worshipped and loved around the world.

Come listen and experience the presence, the love and the wisdom of our Divine Mother, ever-present, always loving and nurturing. Though we may have never had an intimate, juicy, loving relationship with Her, She has always been with us, for us, in us, guiding us, loving us like a Mother would, unconditionally. The Divine Mother is rising/returning to her rightful, exalted place in our consciousness and heart after being ripped from us by Patriarchy.

THIS EVENT IS JUICY THAT THERE ARE TWO PANELS!!!

PANEL ONE: THE DIVINE MOTHER OF MANY TRADITIONS

The Questions we will be exploring:
1) How has The Divine Mother been your source of Peace?
2) How can we be her Ambassadors of Peace for this world on fire?
3) What rituals and practices to the Divine Mother can we offer RIGHT NOW to begin our Sacred Activism and embrace the divine feminine energy to begin to shift out of harmful ways are a) to engage in reciprocal ways vs. extractive ways, b) to honor cyclical time vs. linear time, and c) to honor a sacred intuitive relationship with Spirit vs. an authoritative, hierarchical relationship through institutions.*

ANASUYA aka “Hallelujah Anasuya” ISAACS: Mystic Midwife, Conscious Channel for MotherGod & the Black Madonna, Spiritual Counselor, Writer and Painter. Anasuya combines her many gifts into healing experiences that shift grief, trauma and shame into medicine for overcoming and thriving. A few of the Beloveds that Anasuya has served are homeless youth, women leaving domestic violence, sexual abuse survivors and refugees fleeing terror at home. Anasuya created and has been facilitating her “Let Love Lead” experiential programs that ignite the sacred alchemy between theater, poetry, song and art to transmute trauma and systemic oppression. This platform creates safe space for a return to wholeness/holiness and for experiencing the oneness between cultures, races and religions. She has a B.A, in International Relations from Oberlin College and studied and studied at the Sorbonne Universite de Paris. http://www.hallejuah-anasuya.com

CHINA GALLAND AUTHOR and SCHOLAR
China Galland, M.A., is the prize-winning author of several non-fiction works including “Love Cemetery, Unburying the Secret History of Slaves” (HarperOne), “Longing for Darkness, Tara and the Black Madonna” (Penguin). She’s completing a documentary film, “Resurrecting Love,” about an East Texas African American community’s struggle to reclaim Love Cemetery, the historic burial ground they own. “The Bond Between Women, A Journey to Fierce Compassion” (Riverhead/Penguin), was chosen as one of the best five books on Spirituality by the annual “Books For a Better Life Award.” Galland has been a Professor in Residence at the Center for the Arts, Religion, and Education at the Graduate Theological Union in Berkeley, CA, the largest consortium of Christian schools of theology in the U.S, as well as a Research Associate, and adjunct faculty. “Art, Darkness, and the Womb of God,” the graduate level intensive, grew out of her pioneering work on the Divine Feminine cross-culturally. She has been affiliated with the Graduate Theological Union for over 20 years.
https://resurrectinglove.org/about/ Pilgrimage to the Black Madonna https://theshiftnetwork.com/course/41930/x

SHILOH SOPHIA, ARTIST of ICONS of the Divine Feminine
Shiloh Sophia lives life as a great adventure narrated by the creative fire of her Muse! She has dedicated her life to the belief that self-expression is a basic human right and shares her message with thousands around the world. Through her paintings, poetry, and teachings she leads a global movement of revolutionary education focused in Intentional Creativity® serving tens of thousands of women and celebrating the Divine Feminine for over 25 years. She co-founded MUSEA: Centers for Intentional Creativity® with locations around the world. She lives in the Bay Area with her husband Jonathan, also a poet as well as a chef and wine-maker. Paintings, Poetry and Philosophy: http://www.shilohsophia.com Facebook Page: http://www.facebook.com/Artist.Shiloh.Sophia/

ELISI JOAN HENRY ale Dekanogisgi (Tsalagi/Nde’/Arawaka)
It has been Ms. Henry’s privilege to be a carrier of songs for elders among the Nde’ (Apachu), Coast Salish, Shoshone, Paiute, Hopi, Chippewa/Cree, Dakota and other nations, that these songs might be kept alive and brought out where needed. Raised to listen deeply from an early age, Ms. Henry was traditionally educated in Indigenous therapeutic &amp; healing arts, becoming both dekanogisgi (song-carrier) and hahesh’kah (lead drummer). She is best known, however, as a Composer/Performer/Artist/Educator, Dekanogisgi &amp; Water Protector appearing on Broadway stages, films & concert halls whose youth was filled with her grandmothers’ & elders’ stories, songs and healing
plant-knowledge.

Dr. JIM GARRISON
Dr. James Garrison is founder and president of Ubiquity University and the convener of Humanity Rising. He came to this having served as president of Wisdom University which he led from 2005 – 2012, after which he led its transition into Ubiquity University, established in 2012. He has spent his entire professional life in executive leadership, including as co-founder and president of the Gorbachev Foundation/USA (1992 – 1995) and State of the World Forum (1995 – 2004) with Mikhail Gorbachev serving as convening chairman. Jim received his B.A in History from the University of Santa Clara, an MA in History of Religion from Harvard University, and a PhD in Philosophical Theology from Cambridge University. He has written numerous books.

IMANI OMIOKAN IYA ORISHA: Priestess, Healer, Matriarch, Spiritual Therapist
Imani was a social and cultural revolutionary during the 60′-70’s for Black Liberation. She knew that she was bringing changes to the minds of communities and individuals was needed and so was feeding their souls. She started with self. Imani embraced the path of African Spirtuality with the Yoruba Tradition. She became a Priestess in the Lucumi tradition in 2002. Her work as Olorisha has spanned the US and abroad providing knowledge and training to women who seek to further their spiritual ascension. As Elder and Priestess, Imani continues to assist women in connecting to Spirit, Mind and Body to fulfill their soul purpose.