RELIGIOUS FREEDOM & THE LAW OF GENDER 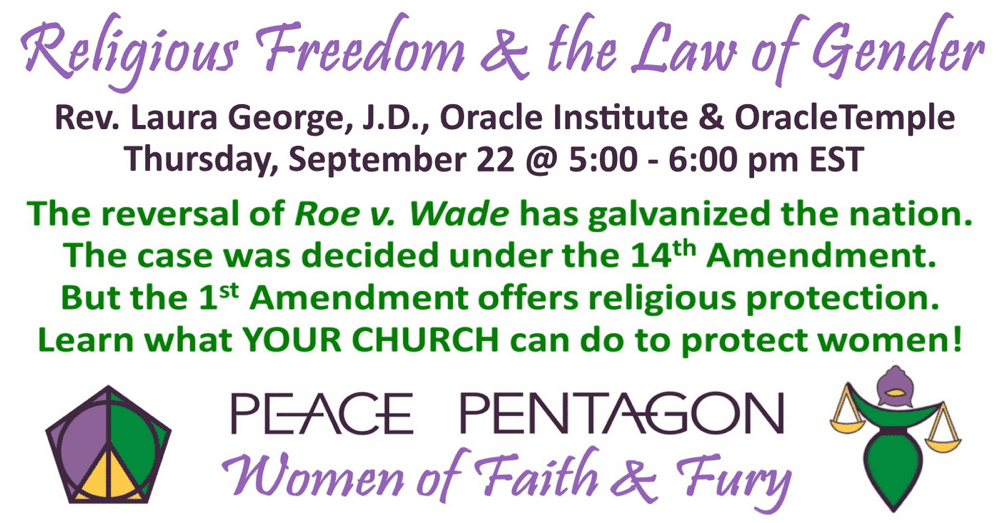 The reversal of Roe v. Wade has galvanized the nation. The case was based on a woman’s right to privacy under the 14th Amendment. However, the states have rights that can counter-balance privacy and equal protection, which is how the states undermined abortion rights. The 1st Amendment permits no state encroachment because Religious Freedom is deemed an absolute constitutional right. Thus, Religious Freedom provides a better argument for female bodily sovereignty IF a woman can show her religion is based on the primacy of motherhood and a gender-balanced Godhead.

Oracle Temple is an esoteric church founded on a genderful/genderless Godhead. Oracle Temple is dedicated to both Divine Masculine and Divine Feminine principles, as set forth in Hermetic and Kabalistic principles. The Law of Gender is the simplest law of the Universe. Learn how this view of deity impacts women’s rights and why many faiths – Judaism, Unitarian, Buddhist, and Pagan – are filing 1st Amendment lawsuits and join Oracle’s **Women of Faith and Fury campaign**!

Rev. Laura M. George, J.D. (Tau Lama) serves as Executive Director of The Oracle Institute, a 501(c)(3) educational charity and spiritual think-tank that studies the nexus between religion, politics, human rights, and conscious evolution. She also serves as lead minster for Oracle Temple, an esoteric church based on Hermeticism and Gnostic Christianity. She is the co-founder of the Valley of Light micro-community in Independence, Virginia, home of the Peace Pentagon conference and retreat center. Tau Lama received her undergraduate degree in Commerce from the University of Virginia (1983), her law degree from Boston University (1986), and her ministerial training through the interfaith Order of Melchizedek (2011). She is the author of the award-winning Oracle Institute trilogy – The Truth: About the Five Primacy Religions (2006), The Love: Of the Fifth Spiritual Paradigm (2010), and The Light; And the New Human (2022). She also is a member of the Evolutionary Leaders Circle.

Join us in the Personal and Planetary StewardHeirShip Zoom Room