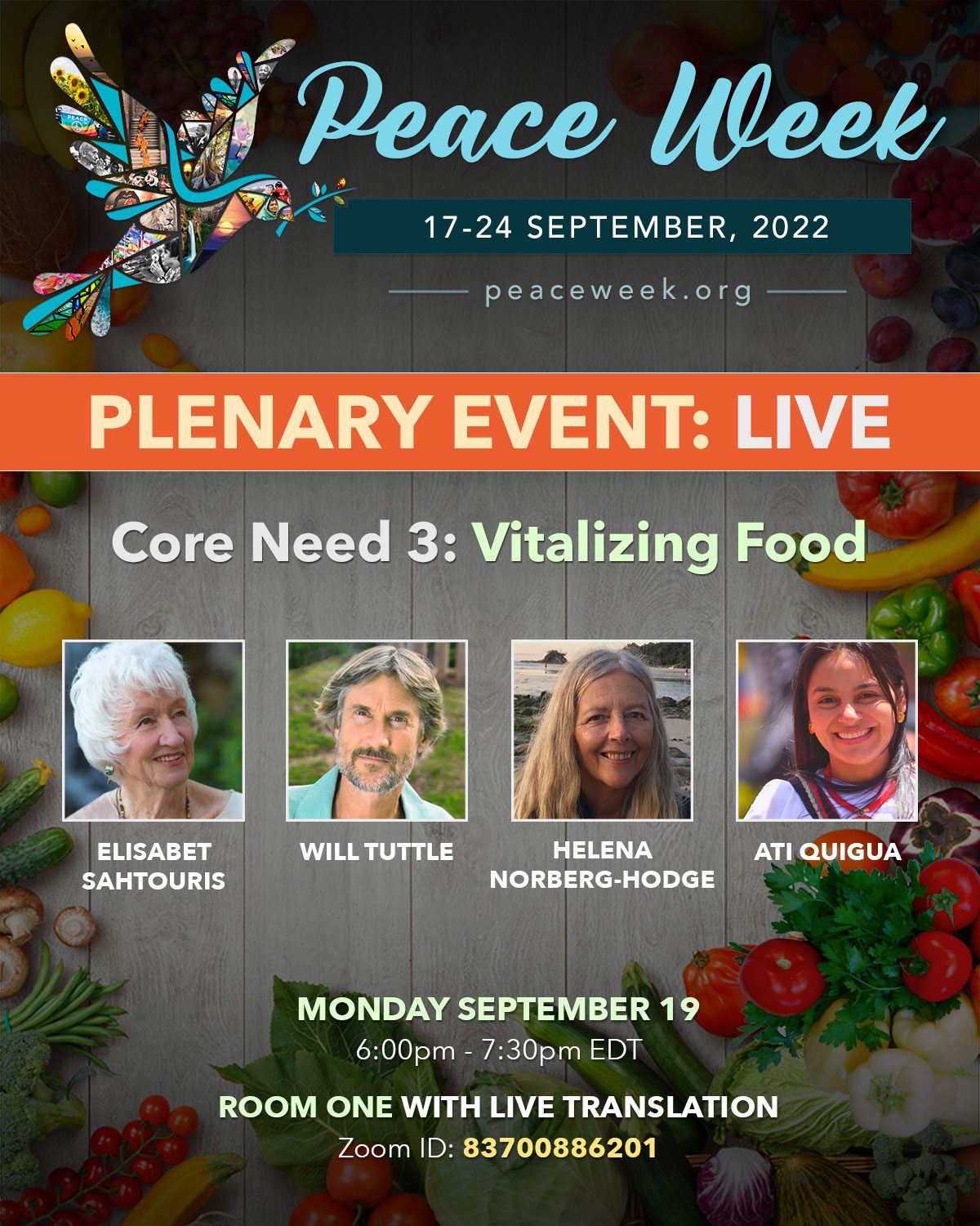 This 90-minute plenary, with interactive Q&A, invites leaders in the field of healthy food systems and vitalizing nourishment, with Elisabet Sahtouris, Helena Norberg-Hodge, Ati Quigua & Will Tuttle to respond to the following questions:
We are excited to announce that this plenary will have live Spanish translation in the zoom meeting! Join the LIVE zoom here: https://unity-earth.zoom.us/j/83700886201
Or watch live and on-demand on www.theone.stream!
The daily themes of Peace Week 2022 are inspired by the second primary task of Eco-Governance, which is to ensure that the 7 Core Needs of all humans and animals are met through guaranteed access to:
To learn more about the 7 Core Needs visit https://www.codes.earth/7coreneeds
Biographies of the Speakers
Dr. Elisabet Sahtouris is an internationally known evolution biologist and futurist, with talks and media appearances on all five continents. After a post-doctoral fellowship at the American Museum of Natural History, she taught at MIT, the University of Massachusetts, contributed to the NOVA-Horizon TV series, became a fellow of the World Business Academy with an honorary Chair in Living Economies, a fellow of the Findhorn Foundation In Scotland, and is on the Advisory Board of Ethical Markets, Tree Sisters and other organizations. Dr. Sahtouris is a co-founder of the Worldwide Indigenous Science Network and has convened international symposia on Foundations of World Sciences in Japan and  Malaysia. She is currently a Professor in Residence at Chaminade University in Honolulu. Dr.Sahtouris’ most recent book is Gaia ‘s Dance: the Story of Earth & Us.
Helena Norberg_Hodge, a pioneer of the new economy movement, is the founder and director of the international non-profit organisation, Local Futures, and the convenor of World Localization Day. She is author of the inspirational classic Ancient Futures, and Local is Our Future and producer of the award-winning documentary The Economics of Happiness. She is the founder of the International Alliance for Localisation, and a cofounder of the International Forum on Globalization and the Global Ecovillage Network.
Helena is a recipient of the Alternative Nobel prize, the Arthur Morgan Award and the Goi Peace Prize for contributing to “the revitalization of cultural and biological diversity, and the strengthening of local communities and economies worldwide.”
www.localfutures.org
https://worldlocalizationday.org/
www.helenanorberghodge.com
Ati Seygundiba Quigua Izquierdo, Indigenous Iku (Arhuaca). Public Administrator, from the Escuela Superior de Administración Pública E.S.A.P., Master in Government and Public Policy from the Universidad Externado de Colombia and currently a doctoral student in Political Studies at the same University. Councilwoman of Bogota in the periods 2004-2007, 2008-2011 and currently for the period 2020-2023 for the Indigenous and Social Alternative Movement – MAIS, political platform where most of the Indigenous Peoples of Colombia are unified, and of which she serves as spokesperson.
All her work has been oriented to the defense of women’s rights; recognition of the rights of nature, particularly the protection of water bodies and the Sierra Nevada de Santa Marta; indigenous peoples, Afro-Colombians, blacks, raizales and palenqueros. Likewise, she has fought resolutely for the rights of victims, since at a very early age she was a victim of forced displacement along with her family. https://atiquigua.co/
Dr. Will Tuttle, visionary author of the acclaimed best-seller The World Peace Diet, published in 17 languages, is a recipient of the Courage of Conscience Award and the Empty Cages Prize. He’s also the author of Your Inner Islands, on developing intuition, as well as editor of two other books, Circles of Compassion, on the interconnection of social justice issues, and Buddhism and Veganism, on the connection between animal liberation and spiritual awakening.
Dr. Tuttle’s Ph.D. from the University of California, Berkeley, focused on educating intuition and altruism in adults, and his doctoral dissertation was nominated for the Best Dissertation Award. He has taught college courses in philosophy, humanities, mythology, religion, and creativity. A former Zen Buddhist monk and a Dharma Master in the Korean Zen tradition, Dr. Tuttle is a noted composer and pianist. He has created ten CD albums of uplifting original piano music as well as several spoken word meditation CDs.
A vegan since 1980, he is a frequent radio, television, and online presenter, and has created several wellness and advocacy training programs. Featured in Cowspiracy and other documentary films, he is the co-founder of the Worldwide Prayer Circle for Animals. Since 1985, Dr. Tuttle has delivered 4,000+ live audience presentations promoting compassion, intuition, and vegan living, in over 50 countries worldwide and in all 50 U.S. states.
https://www.worldpeacediet.com