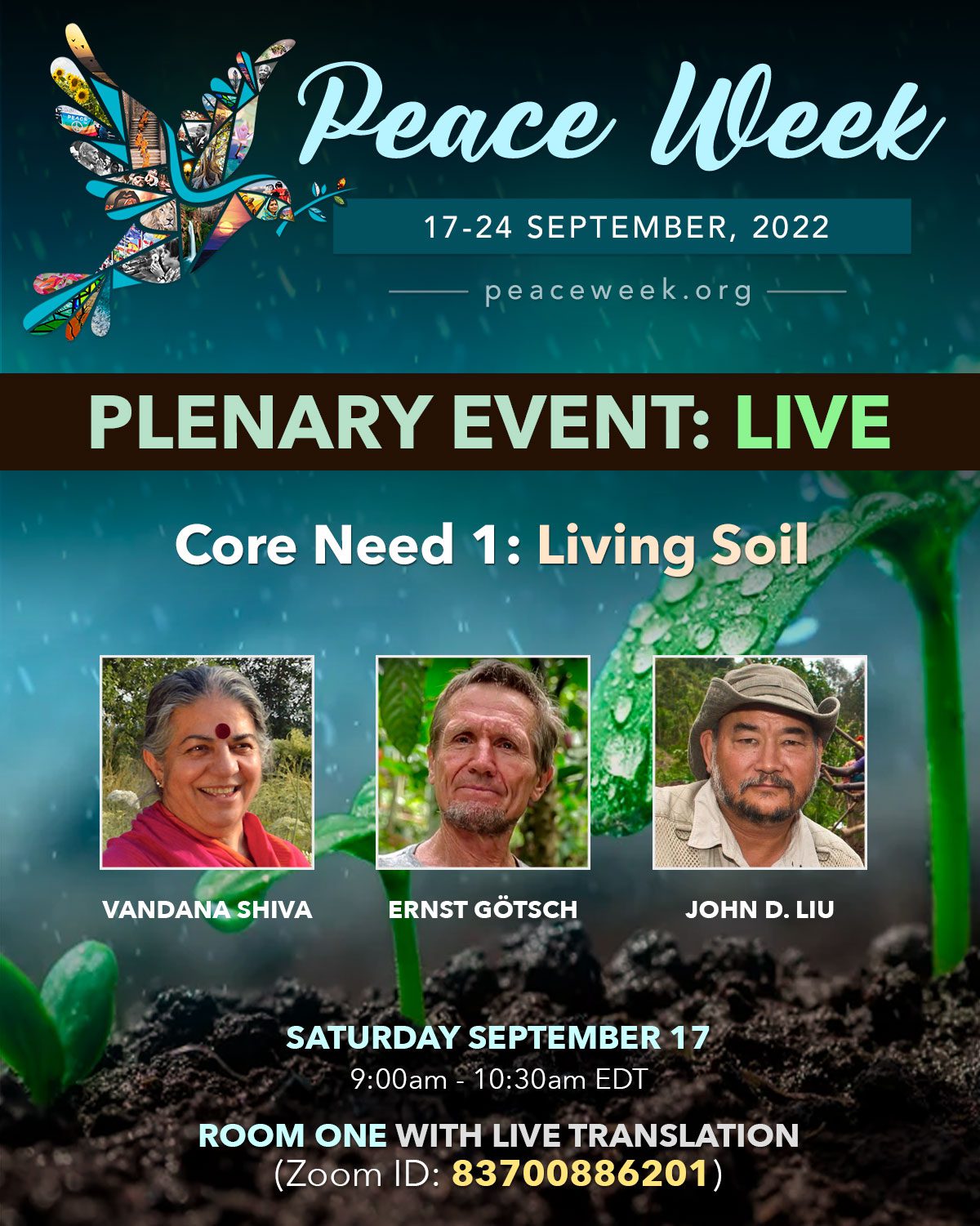 This 90-minute plenary, with interactive Q&A, invites leaders in the field of soil stewardship and ecosystem regeneration, Vandana Shiva, John D. Liu and Ernst Götsch to respond to the following questions:

We are excited to announce that this plenary will have live Spanish translation in the zoom meeting! Join the LIVE zoom here: https://unity-earth.zoom.us/j/83700886201

Or watch live and on-demand on www.theone.stream!

The daily themes of Peace Week 2022 are inspired by the second primary task of Eco-Governance, which is to ensure that the 7 Core Needs of all humans and animals are met through guaranteed access to:

To learn more about the 7 Core Needs: https://www.codes.earth/7coreneeds

Biographies of the Speakers:

Vandana Shiva is an intellectual and activist from India, who has worked in a wide range of different fields inspiring change globally. Her activism is rooted in promoting counter-development and supporting grassroots networks, women’s rights and ecology. As the author of numerous important books and articles, Shiva has shown a lifetime interest in campaigning against genetic engineering and the negative impacts of globalisation, advocating for the crucial importance of preserving and celebrating biodiversity.

Shiva’s record has been that of the totally committed, very productive and effective activist-advocate-intellectual. As an activist, she has coordinated, supported and learned from grassroots networks on a wide range of issues across India. As an advocate, especially in international fora, she has proven to be one of the most articulate spokespersons of counter-development in favour of people-centred, participatory processes. As an intellectual, she has produced a stream of important books and articles, which have done much both to form and address the agenda of development debate and action. https://www.navdanya.org/](https://www.navdanya.org/

John D. Liu is a journalist, filmmaker, ecologist whose work documenting the restoration of China’s Loess Plateau has helped to show that it is possible to restore natural ecological systems rather than simply accept the threats of climate change, species loss.

John D Liu is currently Ecosystem Ambassador for the COMMONLAND FOUNDATION which has been pioneering privately invested ecosystem restoration around the world. https://www.commonland.com/

John has produced, filmed, written, directed, and presented dozens of films on Environment and Ecology that have aired on the BBC, National Geographic, Discovery, PBS, and other networks. Most of John’s published and broadcast works are collected at: https://knaw.academia.edu/JohnDLiu

Ernst Götsch was born in 1948 in Raperswilen, Switzerland, and migrated to Brazil in the early 1980s, establishing himself in a farm in southern Bahia. Years before, Götsch had decided to quit a research job on genetic enhancement at the state-owned FAP Z¸rich-Reckenholz (today’s Agroscope), after a disturbing questioning:

“Wouldn’t we achieve greater results if we sought ways of cultivation that favor the development of plants, rather than creating genotypes that support the bad conditions we impose them?” Ernst Götsch

Aware that the answers he looked for would not come from the laboratory, he resigned, and in 1974, leased areas in Switzerland and Germany to begin his experiments in the field. Influenced by the theories of Ecological Agriculture launched by Hans Peter Rush and Hans Müller, he systematically combined the cultivation of vegetables, roots, and grains, in search for beneficial cooperations that resulted in greater productivity. He took an important step by integrating fruit cultivation into his designs, and observed the benefits the trees brought to the system, thanks to their biomass from the woods and the positive interactions with other species. He proposed to increase the diversity of the consortia, including not only short cycle species but all stages of a forest occupation – from pioneer (placenta) to climax. He then understood deeply that the dynamics of natural succession should be incorporated into agriculture, favoring, as in a forest, the establishment of ecosystems with increasing levels of organization. In that period, one of his conclusions was that the health of the plant did not depend exclusively on the treatment given to it as an individual. Neither was the rotation of crops or consortia. It was necessary to consider the ecosystem as a whole, including intraspecific and interspecific relationships. https://agendagotsch.com/en/